Abstract: This article explores the difficult problem of estimating the mutual information between two variables from a sample of data. I use examples to demonstrate the challenges, and introduce a new algorithm for estimating mutual information along with an explicit representation of its uncertainty.

Another possible measure is mutual information, I(x,y). In Figure 1, the variables have a zero correlation and zero rank correlation, but have 6.5 bits (4.5 nats) of mutual information (when x & y are each quantized into 32,000 distinct discrete values), demonstrating that this measure can pick up on dependencies undetected by straight correlation.

Although promising as a measure of association, it is difficult to estimate I(x,y) from empirical data. I will explore these difficulties in the remainder of this article, and introduce a new algorithm for doing so.

I limit the scope of this article to discrete variables and discrete probability distributions. The issues here are also important to estimation in the case with continuous variables, since estimation techniques often partition continuous values into discrete bins (Marek & Tichavský (2009)).

Given a joint probability distribution, P(x,y), over two discrete variables, the mutual information I(x,y) between x and y is defined as

The sum excludes terms with $latex P(x,y)=0$. The base 2 logarithm is often used, in which case result is in units of bits. The natural logarithm can alternatively be used, in which case the result is in units of nats. In this article I use the natural log. The most important thing to notice about this definition is that it defines mutual information in terms of the underlying probability distribution, which is unknown to us when we are trying to estimate $latex I(x,y)$ from sample data.

Let $latex (X_i, Y_i)$ be a data set of $latex N$ data points. To compute the empirical mutual information, count the frequencies of each combination of values, $latex freq(x,y)$, and then compute: 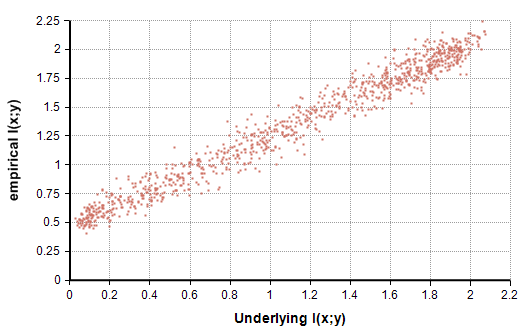 Each data point in the above graph corresponds to one experiment, there are 1000 points shown. Notice that when the true underlying $latex I(x,y)$ is 0.1, the simple estimator consistently returns a value around 0.6. These very poor estimates illustrate the inherent bias in the simple estimator. Figure 3 shows the difference between the estimated and actual, or sampling error.

Figure 3 – Sampling error: The difference between the estimated and true I(x,y) as a function the true underlying I(x,y).

Figure 3 illustrates that the bias in the estimation decreases as the level of statistical dependence increases.

It is fairly easy to analyze the case of statistically independent variables. When x and y are independent, their mutual information is 0. But since the simple estimator only adds together positive quantities, it always returns a positive value, never reaching zero.

The simple estimation formula for the independent case, multiplied by $latex 2 N$, is the same as the G statistic used in a statistical G-test, and this statistic is known to have a chi-squared distribution (Harremoës & Tusnády (2012)). 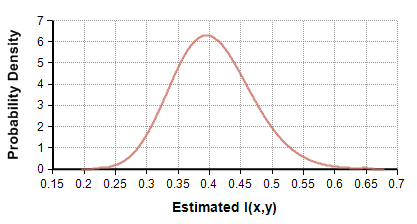 Figure 4: The distribution of estimated $latex I_N(x,y)$ values when x and y are independent.

In Analytica, you can plot of the distribution for $latex I_N(x,y)$ using the expression

where K are the number of distinct discrete values for x and for y, with K=10 in my example. N is the sample size and is 100. The plot shows that when x and y are independent, you can expect to get an estimated value around 0.4, and it is very unlikely you'll see an estimate below 0.2.

I experimented with independent variables, varying same sizes (N) and number of discrete outcomes (K), and found the theoretical distribution in Figure 4 is a perfect match to empirical simulations.

In Figure 3, the dispersion of $latex I_N(x,y)$ is nearly twice the standard deviation predicted for the independent case. Plus, the bias in the estimate decreases as the underlying mutual information increases.

where $latex c = (K-1)^2 / (2 N)$. This is an empirically derived formula for the E[ IN(x,y) ], not a mathematically derived one. I discovered through experimentation that a slightly improved fit results when you multiply $latex H_N$ by 0.8 before inserting it into the formula for E[ IN(x,y) ] — this twiddle reflects the reality that the empirical entropy is not a perfect estimator of the upper bound. With these adjustments, Figure 5 depicts the remaining sampling error. 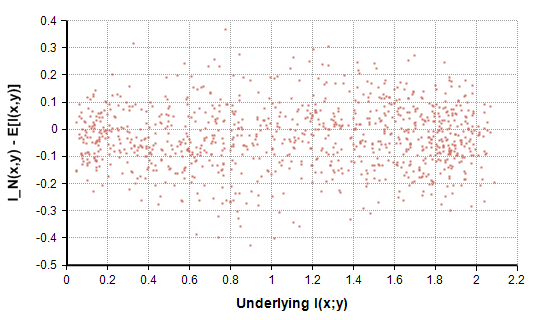 The thing to notice from Figure 5 is that the adjusted sampling error (the vertical axis) is centered around zero, demonstrating that the adjustment accounts correctly for the sampling bias across all levels of statistical dependence. 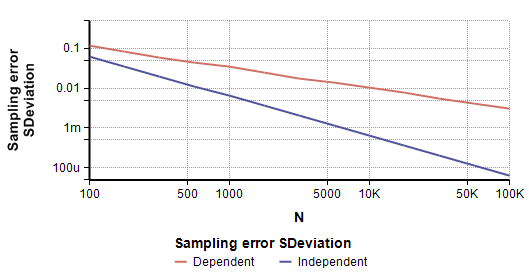 Figure 6: Dispersion in sampling error as sample size changes. The variance for dependence reduces more slowly than for independent variables.

Where $latex gamma=0.18$ accounts for the y-intercept in the log-log plot. Once again, this is an empirical observation, not a theorem.

Numerous authors have advocated methods of subtracting the expected bias from the simple estimator as a way of obtaining an unbiased estimator of $latex I(x,y)$  (Miller (1955), Chee-Orts & Optican (1993), Hertz et al. (1992), Panzeri & Treves (1996)). To a crude first order, one can simply subtract $latex (K-1)^2/(2*N)$, the bias for the independent case. The various authors have approached this by finding various ways to obtain a more refined estimate of bias.

Bias subtraction has the obvious drawback that your estimation of I(x,y) after subtracting bias may be negative, which has no obvious interpretation. These papers generally focus on obtaining a single unbiased estimate of  I(x,y), whereas I have an interest in obtaining information about the degree of uncertainty in the estimate (the Chee-Orts & Opticon (1993) method has potential to be adapted to include uncertainty). Several of the proposed bias compensation offsets depend only or the granularity of the discetization and the sample size, and therefore do not capture the effect depicted in Figure 3, where it is seen that the bias decreases with increasing statistical dependence.  The algorithm that I introduce in the next section is intended to address these issues.

In this section, I introduce a new algorithm for estimating the posterior distribution of I(x,y) from sampled data. I derive the algorithm by inverting sampling error of IN from the preceding sections. It is equivalent to using Bayes' rule with a uniform prior over I(x,y).

The idea is depicted graphically as follows. Suppose we receive a data set and compute $latex I_N(x,y) = 1.1$. The empirical model derived in the preceding sections gives us a statistical model of the sampling error, which characterizing the scatter of the points in Figure 7. We take a slice at the measured value for $latex I_N(x,y)$ as shown by the dotted blue line. 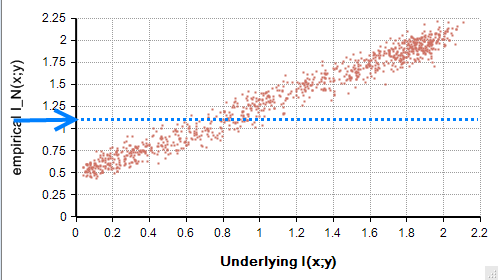 Figure 7: Sample information tells us we're on the blue line.

The posterior estimation of I(x,y) is a unimodal distribution along the blue dotted line in Figure 7. To make it easy to invert, I use the characterization of the bias to draw a line through the middle of the cloud of point, along with a band on each side.  To do this, let

Note: I have found that substituting $latex 0.8 H_N$ for $latex H_N$ works better, and have done so in the graphs and results here.

Figure 9 plots y(x) along with $latex y(x) pm sigma$, which is a graphical depiction of the distribution of IN(x,y) as a function of I(x,y). 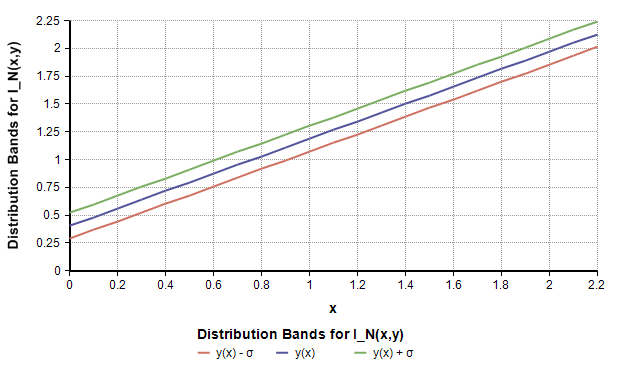 Figure 8: Depiction of the distribution of IN using bands at ±1 standard deviation.

The bands depiction in Figure 8 is somewhat tailored to the actual data sample, unlike the scatter in Figure 7, since it used $latex H_N$. By inverting the lines in Figure 8, we obtain the posterior mean and standard deviation (ignoring the boundary at I(x,y)=0).

We can then represent the posterior estimate of I(x,y) using a truncated Normal distribution. For example, in Analytica syntax,

All examples in this section use discrete variables having K=10 possible values.

In the first example, I sampled N=100 points from a distribution having I(x,y)=0.736. The sample information was $latex I_N(x,y)=1.1$. The estimation algorithm produces posterior estimate shown in Figure 9. 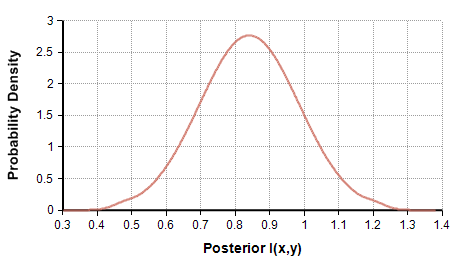 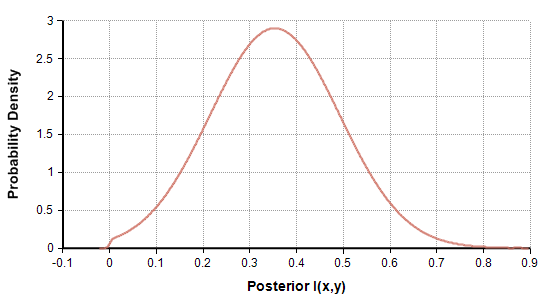 The third example sampled N=100 points from an underlying distribution having I(x,y)=0.046. The empirical information was 0.55 and the posterior estimate for I(x,y) is shown in Figure 11. 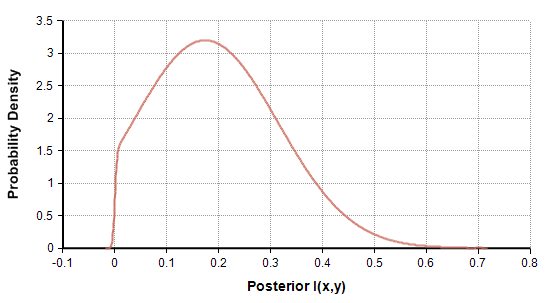 Mutual information can capture complex associations between variables that are missed by standard correlation measures. However, estimating the underlying mutual estimation from a data sample is challenging, due to an inherent bias present in the empirical mutual information. In left uncompensated, this bias magnifies the apparent degree of statistical dependence for cases having little or no dependence.

This article introduces a new Bayesian-style algorithm, derived from an empirical study across a sampling of distributions, for estimating I(x,y) from a data sample, with an explicit representation of the uncertainty in the estimate.

You may find it disturbing that I developed the algorithm from an empirical study. It is entirely possible that my sampling of underlying distributions is not representative of a distribution you encounter in your own application, and that could throw off the quality of the results. If you are academically minded, you may find the absence of an analytical derivation behind the algorithm to be disconcerting. These are all valid criticisms.