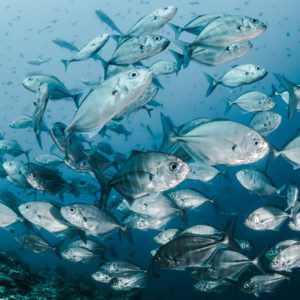 Can We Eat Methane? Converting Greenhouse Gases into Fish Food

Methane has a global warming potential of 86 times carbon dioxide over 20 years. An energy rich molecule and the primary constituent of natural gas, methane is emitted and flared from industrial sources across the United States because it is uneconomical to capture, clean, and use. However, some bacteria (called methanotrophs) consume methane and can transform it into protein-rich biomass that is suitable for animal feed.

Importantly, this microbial biomass can serve as a substitute for fishmeal used in aquaculture feed. Fishmeal is produced from wild-caught fish, thereby putting additional pressure on the world’s over-harvested marine fisheries. Aquaculture is an increasingly important source of food globally, but its reliance on fishmeal threatens its long-term sustainability. Thus, if produced at an industrial scale, methanotrophic bacteria may be able to both replace fishmeal while also providing incentivize to capture a potent greenhouse gas.

Industries are currently commercializing production of animal feed using natural gas, an approach that increases reliance on fossil fuels. Would it be economically viable to  capture and use stranded gas? Stranded gas is methane that is directly emitted to the atmosphere or flared. Sources of this unused methane are scattered across the United States and vary greatly in scale. Can production of methanotrophic protein compete with fishmeal on the market? Will it support a meaningful production rate compared to the size of the fishmeal market?

Analytica allowed for a very clear visualization of our model, and to iterate and expand with increased complexity and nuance. The user interface allows us to rapidly iterate, making changes to inputs or calculations and compare different outcomes. A portion of our analysis, for example making maps of methane distribution, was done in R. Exporting the relevant data from Analytica to R was fairly straightforward.

We find that the largest sources of stranded methane in the United States can support production of protein that is economically competitive with fishmeal. To calculate the cost of production, we used Analytica to model the processes involved in production. We used values from the scientific literature to inform the range of capital and operational costs for all our processes involved, also including costs of electricity, maintenance and labor. We used publicly available data on methane emissions and flaring from landfills, wastewater treatment plants, and oil and gas facilities. We then estimated the cost for production at each of these sources.

Our findings demonstrate that for the largest  sources of stranded methane in the United States, the cost of transforming the methane into protein is less expensive than the average 10-year market price of fishmeal. Importantly, however, these sources of methane could produce enough protein to offset 14% of the global fishmeal market. As technology advances and costs decrease, we anticipate an even greater share of the global fishmeal market can be offset. 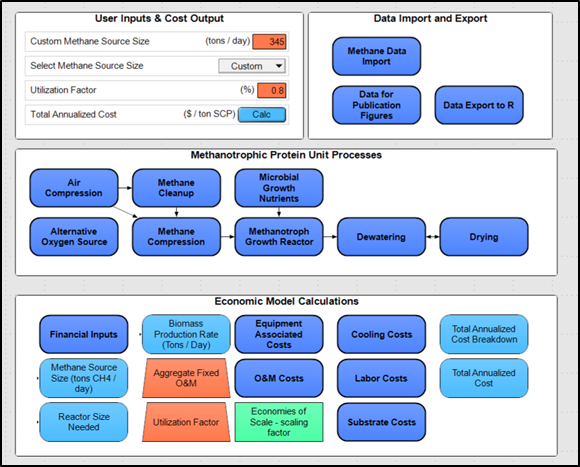 Academic research project, funded by the Stanford Center for Innovation in Global Health and the Stanford Natural Gas Initiative, an industry consortium that supports independent research at Stanford University.

Read the whole article published in the Nature Sustainability Publication.

Read about a blog post about the research behind the paper: https://sustainabilitycommunity.springernature.com/posts/transforming-greenhouse-gases-into-food?channel_id=behind-the-paper