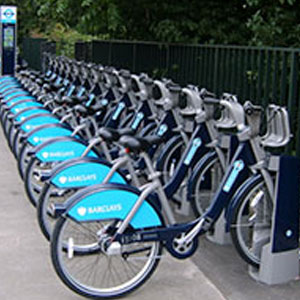 Is Bike Sharing Good for Your Health?

With the popularity of the Healthy Cities movement, many cities are setting up bicycle rental programs, not only to reduce traffic and pollution, but also to encourage physical exercise.

However, riding bicycles can have higher risks of injury and exposure to pollutants than other methods of travel.

Researchers used Analytica to model the effects of bike sharing programs in London and in Barcelona to find out whether these programs actually have net positive effects on health.

Bicycle rental programs for commuters have spread to cities around the world in recent years. A report in 2013 counts programs in over 500 cities in 49 countries, with a total of over 600,000 bicycles. Major programs include China’s Wuhan and Paris’ Vélib, El Bicing in Barcelona, and the London cycle hire scheme.
Bike share programs reduce traffic congestion and greenhouse gas emissions.  The physical exercise of riding a bicycle should also be better for riders’ health than driving or taking public transport. But riders have an increased risk of injury in accidents and exposure to air pollutants. How do these benefits and risks balance out?  James Woodcock and Marko Tainio from Cambridge University and colleagues developed an Analytica model to provide a comprehensive assessment.

“We like the visual interface. It’s a great way of explaining what the model is doing.”
– James Woodcock, University of Cambridge

“Analytica works perfectly for the small decision analysis models with multiple dimensions and interactions between variables. Graphical user interface allows non-programmers, like us, to build a model with minimum programming knowledge. Built-in sensitivity analysis tools help us test the models and know better where to focus our efforts.”
– Marko Tainio, University of Cambridge

Two major studies, first in Barcelona and then London, used Analytica to analyze the effects of bikeshare programs on mortality due to traffic injury, physical activity, and air pollution.

Researchers used registration and usage data from bike-share users in both cities, survey data, and city data on travel, physical activity, traffic accidents, and air pollution. The models used this data to estimate the effect on mortality rates. The London study alsu uses disability-adjusted life years (DALYs) — the sum of life years lost due to early mortality and healthy years lost due to disability. 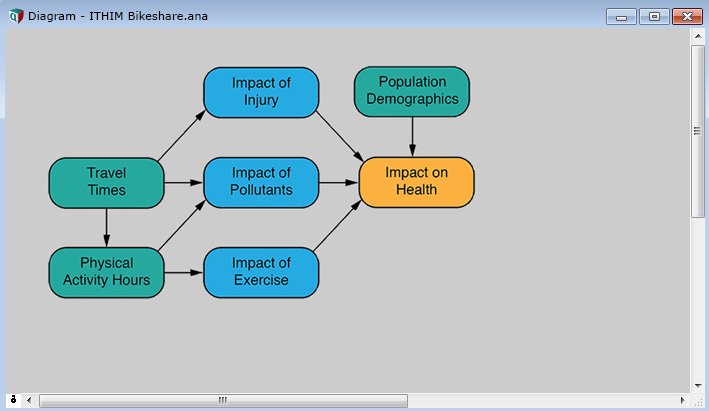 Estimates for London and Barcelona were based on different models, both of which were implemented in Analytica. The influence diagram above shows a simplified version of the London model, including population demographics, travel times, and total hours of physical activity, to estimate the impact on health due to injury, pollutants, and exercise. It combines these to calculate the total effect on mortality and DALYs.

Both studies estimate that bike share programs have produced net positive effects on health for riders of all ages, as well reduced CO2 emissions.

Not enough data was yet available for users of the London Cycle Hire scheme, but preliminary data suggests that their injury rates are lower than for non-Cycle Hire cyclists in London.

In London, women have higher injury rates that lead to an overall smaller positive effect for women than for men. In both studies there were greater health benefits for older people, especially over 45; although the risk of injury increases with age, the greater benefits of more exercise for older people more than counterbalance this risk.

This age effect also helps explain the greater health effect in Barcelona: London riders skew younger than Barcelona. The average air concentration of fine particulates (PM2.5) is slightly lower for walkers and cyclists than those in cars, buses, or taxis, and much lower than in the London Underground.

This effect is slightly counterbalanced by the higher ventilation (breathing) rates of cycling, but the overall impact on cyclists’ health from air pollution was minimal relative to other effects.

In the Barcelona study, the most influential input variables were the risk of injury, duration of the bicycle trips and the number of days cycled yearly. For the London study, the factors with biggest impact on benefits were age and injury rates.

Although riders in London are not required to wear helmets and are not provided helmets, cycle hire injury rates are lower than background cycling injury rates; there has only been on fatality in more than 22 million rides since the program’s start in December 2010.

Sensitivity analysis of the London study finds the direction of findings to be robust to changes in assumptions, suggesting that the results will generalize to other cities.

Bicycle injury risks could be significantly reduced with more bicycle lanes, better separated from traffic, as is common for example in the Netherlands, which has much lower rates of injury.

The integrated transport and health impact model in Analytica, and the statistical analysis do-files (Stata) used to parameterise the model, are available from James Woodcock at jw745@medschl.cam.ac.uk