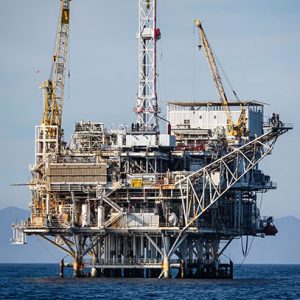 Too many environmental issues cause bitter public controversy. The question of how to decommission California’s 27 offshore oil platforms started out as a typical example.

But remarkably, after careful analysis a single option, “rigs to reefs”, obtained the support of almost all stakeholders, including oil companies and environmentalists. A law to enable this option was passed by the California State house almost unanimously, and signed by Governor Arnold Schwarzenegger.

This project won the Decision Analysis Practice Award at the INFORMS Meeting in San Francisco in November 2014. The Award recognizes outstanding applications of decision analysis to significant decisions. It considers the quality of the analysis, its impact on the decision, and the importance and benefit of that decision to clients, and is based on evaluations by the judges and audience.

It is jointly sponsored by the Decision Analysis Society and the Society of Decision Professionals. “A multi-attribute decision analysis for decommissioning California’s offshore oil platforms” was presented by Max Henrion, Lumina’s CEO, coauthored with Brock Bernstein, and Surya Swamy, then a Senior Decision Analyst at Lumina. 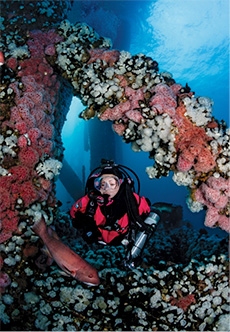 The 27 oil platforms in California’s coastal waters are at the end of their productive life after many decades. The original leases required the platform operators to dismantle and remove them entirely after they cease production.

The platforms are massive structures, up to 1200 feet deep. They are now encrusted with shellfish, coral, and other marine life, providing a rich habitat for economically valuable rock fish. They are popular with sea lions, recreational human divers, and many other creatures. Removal would be costly, over a billion dollars, with substantial environmental impacts, including emissions to air and water, as well as destruction of this habitat.

The California Ocean Science Trust (OST) commissioned an interdisciplinary team to provide a comprehensive survey of the relevant scientific, engineering, economic, and legal issues, with a decision analysis of the key decommissioning options. The study had to consider the concerns of a full range of stakeholders, including environmental groups, oil companies, commercial and recreational fishermen, divers, and a range of state and federal agencies.

These concerns include the cost of removal, environmental impacts on biological productivity, marine mammals and birds, air and water quality, and the seabed, ocean access, and compliance with the leases.

The project team needed a modeling platform to represent the integrated framework, to examine uncertainties and sensitivities, and to enable stakeholders to explore assumptions and scenarios.

They considered spreadsheets, but eventually chose Analytica. “Analytica provided an integrated environment that enabled us to build from initial conceptual models to progressively more complex numerical and narrative models in a transparent and easy-to-use environment,” said Brock Bernstein, Project Leader.

Lumina developed a multi-attribute decision analysis framework to provide a comprehensive treatment of the stakeholder’s concerns to evaluate a wide range of decommissioning options.

They built this model as the PLATFORM decision tool in Analytica. They designed PLATFORM to enable the analysis team and stakeholders to explore interactively the effects of changing assumptions and preferences on the preferred decisions. The team worked with stakeholders to identify their objectives and concerns and structured them as eight attributes, shown as modules down the middle of this influence diagram: 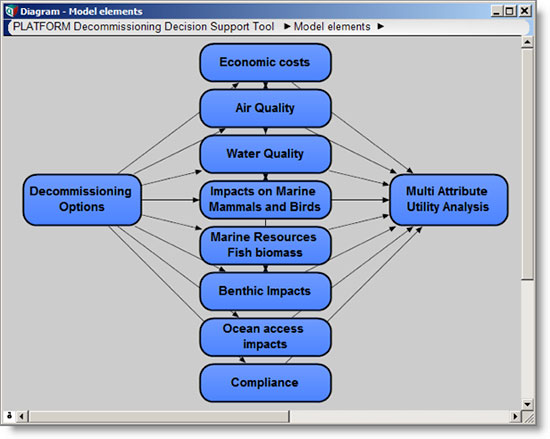 The team identified a wide range of decommissioning options, structured as a decision tree. The main options were

Sadly, recycling these monuments to fossil fuel into platforms for renewable energy turned out to be impractical. 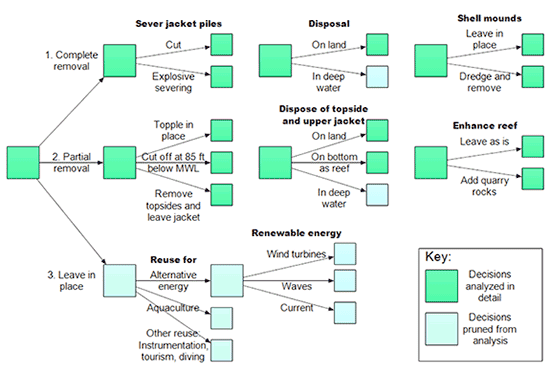 PLATFORM includes quantitative models to estimate the costs of each decommissioning option, effect on biological productivity, ocean access, and air emissions. This influence diagram shows part of the cost model: 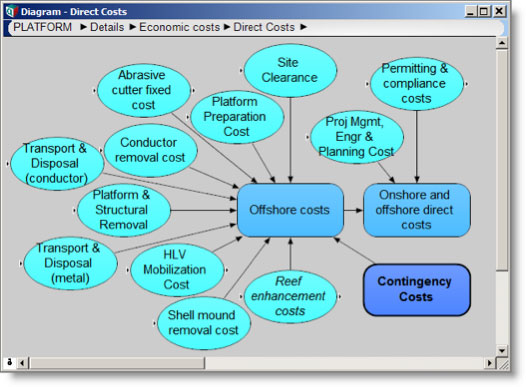 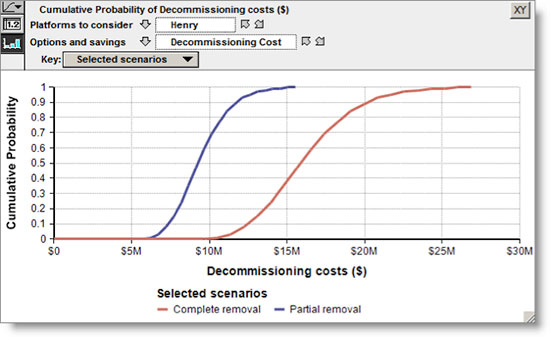 It combines the quantitative and qualitative attributes into a unified framework to evaluate the decommissioning options.

It supports sensitivity analysis to identify the relative importance of these weights and key uncertainties to the recommendations. This tornado diagram shows the effect of varying the swing weights on each attribute on the recommendations for this Platform Harmony.

It shows that only by increasing the weight on strict compliance with the original lease agreement would the preferred decision change from partial to complete removal.

It also shows that uncertainty about costs had relatively little effect on the decision. 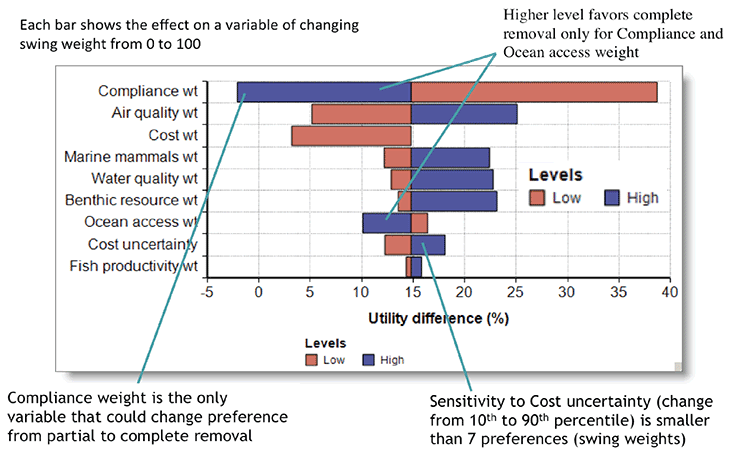 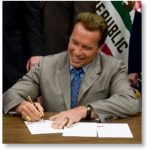 A key insight from the study was that partial removal or “rigs to reefs” option reduced both costs and environmental impacts relative complete removal. Technical contributions included the first quantitative models of fish production and air emissions, and the first probabilistic analysis of decommissioning costs.

A key option for partial removal was to cut platforms off at 85 feet below sea level to avoid interfering with shipping. An additional option to sweeten partial removal for environmental advocates was to share the cost savings from partial removal (potentially over $500 million) between the oil companies and an Ocean Conservation Fund.

With this addition, almost all stakeholders supported the rigs-to-reefs. The California state legislature passed an enabling law, AB 2503, almost unanimously. Governor Arnold Schwarzenegger signed it in September 2010. Decommissioning of the first platforms is expected to start in 2015.

Rigs to Reefs: How Decision Analysis Resolved An Environmental Controversy:  A beautiful 25-minute video by Jonah Moshammer & Drew Lewis for the Decision Education Foundation. This documentary film illustrates for a non-technical audience how a multi-attribute decision model can help illuminate a challenging decision problem. It includes footage of oil platforms, marine life, and interviews with stakeholders, scientists, and the project authors, Max Henrion and Brock Bernstein.

Webinar given by Max Henrion as a Stanford University’s Strategic Decision and Risk Management webinar.