The Mars Climate Orbiter was designed to circle the planet at a height of 140 miles (225 kilometers) so that it could relay to the Earth stunning images of the rocky red landscape from the Mars Polar Lander on the surface below. Sadly, the spacecraft came in too low at only 35 miles (57 kilometers). It hit the thin Martian atmosphere and immediately disintegrated.

NASA’s post-mortem of the 1999 disaster revealed an embarrassing mistake. When Lockheed Martin’s Earth-based controller instructed the Orbiter to fire its thruster, it expressed the impulse in pound-seconds—in US customary units. But according to spec, the thruster expected a number in Newton-seconds—in SI (International System of Units). One Newton, named for Sir Isaac, is the force needed to accelerate a kilogram at one meter per second per second — about the same force as Earth’s gravity exerts on a 100-gram apple. One hundred grams is about a quarter of a pound, so a pound-second is about four times bigger than a Newton-second. The resulting over-correction caused the $327 million spacecraft to enter orbit too low, and hence its unfortunate demise

Americans sometimes call their units “English units” or even “Imperial units”. As a former Brit (but not an imperialist), I must protest. Consider the US measures of volume — pints, gallons, and barrels. A barrel of oil is 42 US gallons, based on the tierce, an old English measure of wine. But today a US barrel of wine or beer is only 31 US gallons. The US gallon – whether of beer, milk, or gasoline – is 20% smaller than the Imperial gallon once used by Great Britain and its former colonies (other than the US). Similarly, a US pint of Budweiser beer in an American bar is 16 fluid ounces, so 20% smaller than an imperial pint of the best bitter in an English pub, which is 20 fluid ounces. Yes, ounces and pounds are still the same in the US and UK. It’s convenient for Americans that their pint of water weights a pound. But the American saying “A pint’s a pound, the World around” is an ethnocentric fiction—and will remain so for as long as Brits (and Canadians and Australians) continue to quaff imperial pints, which are 20% heavier.

The reason for most of these differences is that US customary units were based on the standard units used by the British in 1776 at the time of Amerexit—when some of the North American colonies chose to exit the British Empire. It wasn’t until 1824, after almost 50 years of drift in measures of volume, that Great Britain decided to standardize on “Imperial units” and foist them willy-nilly on its remaining Empire. That’s why US pints and gallons differ from their Imperial counterparts, but pounds, tons, inches, feet, and miles are the same.

It seems bizarre that the USA, the first major colony to wrest its independence from Great Britain, is now the only country in the World still so attached to the units of its former colonial masters. Even the UK itself has (mostly) abandoned their archaic imperial units to join the rest of the World. In 2000, Parliament decreed that the UK should henceforth use metric units as the primary units for everything except draft beer (which still use the imperial pint), road signs (in miles and yards), and speedometers. In the UK, you now buy vegetables by the kilogram, and petrol by the liter.  For us energy wonks, it is noteworthy that the Brits have even given the boot to the venerable British thermal unit! In case you forgot, a BTU is the energy needed to raise one pound of water by 1 degree Fahrenheit.

Until a decade ago, the USA was not entirely alone. Americans could take a little comfort that Myanmar (the ex-British colony formerly known as Burma) and Liberia (settled by former slaves returned from the USA to Africa) still shared official use of the antiquated US customary units according to the CIA’s 2012 Factbook. But, nowadays, even Liberia and Myanmar have moved to metric units, leaving the USA as the sole remaining exception.

Why shouldn’t the US stand against the tyranny of a decimal system of units, which was based on the irrelevant fact that we humans have ten fingers? Why shouldn’t the US retain its quaint exceptionalism in units as in other domains — such as being the only developed nation not to have universal healthcare or paid parental leave? Yes, it’s a little awkward for engineers and us energy wonks, but we already know how to do these units conversions – and do so correctly, usually.  (Analytica users have the Analytica Units library to help them.)

Most of the World, even many Americans, are starting to worry seriously about climate change, and recognize the need to accelerate the transition to a low-carbon economy. So it would be helpful if more people, not just us energy wonks, were able to do basic calculations about energy. How can we compare the fuel cost of use for gasoline cars with the cost of electricity for electric vehicles? When I looked at replacing my propane-fired heating system with an electric heat pump, I had to convert from the price of propane in dollars per gallon to electricity in cents per kilowatt-hour. Using these antiquated units adds an extra needless layer of obfuscation.

The most used SI units for energy, the joule and kilowatt-hour, are closely related. A joule is the energy of one watt of power flowing for a second. It’s not a coincidence that it is also the work done when a force of 1 Newton displaces a mass by 1 meter. (It’s because SI units, unlike US units, are coherent – electromagnetic units and mechanical units and the others designed to fit nicely together.) A kilowatt-hour is the energy of 1000 watts flowing for an hour. So, a kWh is 1000 x 60 minutes per hour x 60 second per minute = 3.6 million joules, or 3.6 megajoules.

Here’s a table showing common US units of energy in joules and kWh:

If you are ok with approximations within about 6%, the conversion factors from BTUs to kWh and joules are easy to work with.  One BTU is about 0.3 watt-hours (0.0003 kWh) or about 1000 joules per BTU. So, a million Btu (MMBtu) is about 300 kWh (293 to be exact) or 1 GJ (gigajoule or billion joules.  (Confusingly, in US units M means one thousand and MM means a million, but with SI units, M means a million.) Coincidentally (and this is a coincidence), the energy in one thousand cubic feet of natural gas (MCFNG) is also about 300 kWh or 1 GJ. A gallon of gasoline (petrol) contains about 36 kWh or 130 megajoules. Combusting a barrel of oil releases about 6 gigajoules (GJ = 10^15 joules). A quad (10^15 BTU), widely used by the US Department of Energy to express national quantities of energy, is close to a 1 exajoule (EJ) or a quintillion (10^18) joules. The annual US human consumption of energy is about 100 quads or 100 EJ. The annual global consumption of energy is around 500 quads or 500 EJ.

Of course, when you’re converting from gas heating to an electric heat pump, you can’t simply compare the energy price per kWh. Typically, electricity costs around three times more per kilowatt-hour than natural gas, or twice as much as propane. However, a heat pump has an “efficiency” – or rather coefficient of performance (COP) of 3 to 4 – meaning it generates 3 to 4 times more heat than the energy in the electricity you use. It does not violate the conservation of energy. It’s because, when it’s cold out, it pumps heat from the outside to the inside (against the thermal gradient), which takes much less energy than if you simply used a conventional resistive electric heater.  Since 3 to 4 is more than 2 to 3, a heat pump often comes out a bit cheaper in terms of energy costs. Or even better recently after the price rise in natural gas and propane as well as gasoline due to Russia’s attack on Ukraine and the sanctions on Russia.

What is the chance that Americans will accept a change to SI units? Actually, the US government did decide the US should go metric back in the 1970s.  And then most US car manufacturers switched from nuts and bolts measured in fractions of an inch to metric measurements and advertised engine sizes in liters rather than cubic inches, perhaps to help them in export markets. Oddly, Boeing still uses US units where Airbus and all aircraft built outside the US naturally use metric units. In the 50 years since then, the US metrication appears to have stalled. With the current US culture wars, it doesn’t look likely to regain momentum any time soon.

But believe it or not, even in Britain, where you might think Brexit was a national expression of xenophobia, gas utilities now report natural gas consumption in kilowatt-hours. My sister Emma Henrion lives in Oxford, England. Here’s part of her energy bill, which shows both electricity and gas usage in kilowatt-hours: 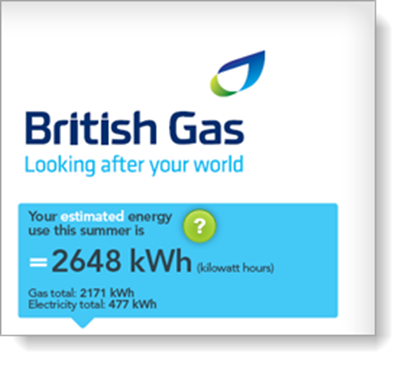 It also shows the prices of gas and electricity in £/kWh. And in the fine print, it explains how they converted to kWh from the units your gas meter uses – if, for example, you have an antiquated gas meter that reports therms or cubic feet. It even reports the greenhouse gas emission intensity of electricity and gas as grams of CO2 per kWh compared to the national average. Way to go!

Max Henrion has 25 years of experience as a researcher, educator, software designer, consultant, and entrepreneur, specializing in the design and effective use of decision technologies. He is the Founder and CEO of Lumina Decision Systems. He has led teams to create decision-support tools in a wide variety of applications, including energy, environment, R&D management, healthcare, telecommunications, aerospace, security, and consumer choice. He is the lead designer of Lumina’s flagship product line, Analytica -— the software about which PC Week said “Everything that’s wrong with the common spreadsheet is fixed in Analytica”.