October 1, 2015 was the UN’s deadline to receive national pledges for the UN Climate Change Treaty to be negotiated in Paris this December. At the end of February, the UN received the first submission — Switzerland’s proposal to reduce its greenhouse gas (GHG) emissions by 50% by 2030. In March it was joined by proposals from the European Union for a 40% cut, from Mexico for a 25% cut, and from the US for a cut of 26 to 28%. Notable proposals since then include 26% by Japan, 25 to 30% by Russia, 30% by Canada, and, perhaps most critical, 60 to 65% by China. In the last few days before the deadline, the UN received a deluge of last-minute submissions — now covering a total of 148 nations of the 193 members of the UN. They represent over 90% of global carbon emissions. 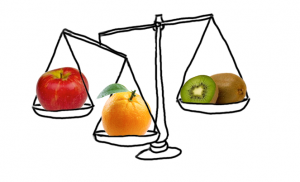 It’s starting to look encouragingly like a Paris treaty could lead to a real reduction in the world’s GHG emissions, much more substantial than the late and little lamented Kyoto Protocol that expired in 2012. This new treaty process starting in Cancun in 2010 invited nations to submit proposals that are “fair and ambitious”. So we have to ask,  is each country indeed proposing its fair share of reduce emissions. And, in sum,  are they sufficiently ambitious to keep global warming below 2 degrees Centigrade, the avowed goal of the UN process?

Not only does the UN process invite each country to define its own emissions targets, it lets each country formulate its emissions plan in its own way provided that they “facilitate clarity, transparency and understanding.” This remarkable flexibility may come as a pleasant surprise to those who fear the UN as a would-be authoritarian global bureaucracy with black helicopters at the ready to enforce compliance. The UN Framework Convention on Climate Change (UNFCCC) invited each member state to submit what they term an “Intended Nationally Determined Contribution” (INDC), reflecting that each sovereign nation gets to make its own independent proposal. The wide variety of formulations makes the proposals hard to compare: Apples to Oranges to Chinese gooseberries — Actinidia deliciosa, China’s national fruit, rebranded in New Zealand as kiwifruit, and of which Italy is now the World’s largest producer. 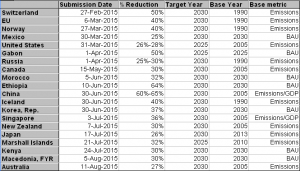 At first sight, the US proposal to cut its emissions by only 26 to 28% seems a bit feeble compared, say, to the EU’s 40%. However, the US targets this cut for 2025, where almost all other countries target 2030 (excepting Gabon and the Marshall Islands). Does an earlier target year mean that the US will move ahead of the rest? If we extrapolate to 2030, we get a reduction of 33% to 36% relative to the 2005 baseline, assuming a continuation of the same 2%/year average reduction planned from now to 2025— still well the EU’s 40%. If instead, we interpolate US emissions from 2025 target down to the 80% cut proposed for 2050 (following the World Resources Institute), we get a slightly more impressive reduction of 38% by 2030.

To confuse things further, countries chose different baseline years from which to calculate their reduction. The US, Canada, and China use 2005, where the EU, Russia, and most other European countries use 1990. They have their reasons. In the US and Canada, emissions peaked in the mid-2000s, just before the great recession of 2008 caused a big drop in energy use and therefore emissions. On the other hand, European emissions peaked in the 1990s, after which they started replacing dirty coal generation with natural gas. The drop in the 1990s was especially noticeable in Eastern Europe and Russia where much coal-fired heavy industry closed down after the collapse of the Soviet Union in 1991.

Japan uniquely selected 2013 as its base year. The meltdown at the Fukushima nuclear plant after the 2011 tsunami led to such a public furor about nuclear safety that Japan shut down not just those plants affected directly, but all 48 of its working nuclear plants. These low-carbon sources of electricity had been generating about 30% of the nation’s electricity, and had to be replaced mostly by coal and gas, causing a big spike in emissions in 2012 to 2013. This may now subside as Japan restarts much of its nuclear capacity.

Most developing countries, such as Kenya, Mexico, and Morocco (and some developed countries, such as South Korea), didn’t use a past base year at all. Instead they define their cuts relative to a future hypothetical emissions in 2030 assuming “business as usual” or BAU, where emissions continue to expand, usually in proportion to their planned GDP growth. In most cases, they propose cuts not to emissions directly, but rather emissions intensity — CO2 per unit of GDP in 2030. Since these countries expect rapid GDP growth, such “cuts” usually imply an increase in actual emissions. Developing countries argue, with some justification, that they should not be constrained to cut their emissions, which are only a tiny fraction of per capita emissions in developed countries. However, experience from now developed countries shows that emissions intensity reduces with development, even with minimal low-carbon policies. So comparisons against BAU assuming fixed emissions intensity are a worse than worst-case scenario against which to quantify reductions.

China’s INDC submission is particularly welcome since China now produces more than a quarter of global carbon emissions. President GW Bush cited China’s nonparticipation in the Kyoto Protocol as a major reason for the US refusal to ratify that treaty. China’s apparently huge cut of 60 to 65% takes a similar approach to those developing countries using BAU. It is actually a reduction in emissions intensity — emissions per unit of GDP — relative to its 2005 baseline. China’s GDP grew at an amazing 9.8% average annual rate from 2005 to 2014, expanding GDP by a factor of 2.35 in nine years.  Over that same period its emissions intensity dropped by 30%, so it is already almost half way to its proposed cut for 15 years hence.

Suppose China’s GDP growth slows over the next 15 years down to an average of 6%/year (US EIA projections assume 6.1%); its GDP in 2030 would still be almost six times larger than it was in 2005: So, a 65% reduction in emissions intensity, would result in a 109% increase in actual emissions between 2005 and 2030. China’s current economic turbulence suggests that 6%/year might be optimistic. Even if its GDP growth slows to 4%/year to 2030, a 65% cut in emissions intensity would still mean a 54% rise in emissions.

In defense of China’s INDC, it does not pretend to cut emissions. Rather it proposes that emissions will peak in or before 2030. China has become infamous for its massive rate of building coal-fired power plants, and the consequent appalling air quality in many Chinese cities. But it is already making great efforts to change direction, in part due to the air quality. Reuters reports that China’s coal use in April actually fell 6.1% for the first 4 months of 2015 relative to the previous year even with a 1% increase in power generation. This reduction was  due in part to expanded solar, wind, and hydropower generation. China already has by far the greatest combined wind and solar capacity of any country, 46% more than the US. In 2014, it added more wind and solar than the US and EU together, and more hydropower than the rest of the world combined. [KL1] China’s INDC also proposes aggressive reforestation to create a carbon sink of about 1 billion tonnes, equivalent to stopping all tropical deforestation for almost a year. In 2014, China set up carbon cap and trade schemes in seven regions, intended as pilots for a national program planned to start in 2017. While China’s INDC provides no meaningful cap on its emissions, we should not judge each country’s contribution not just by the numbers in its INDC, but also it proposed and actual actions.

Given the great flexibility provided by the UN process, it’s hardly surprising that each country structures its proposal in a way that puts it in a good light, and also makes them hard to compare. Is there a way to make them directly comparable? It is misleading to compare national proposals as percentage reductions in emissions, not just because countries use different target years, base years, and emissions metrics, but also because they start from vastly different levels of emissions. Current emissions per capita in the USA, Canada, and Russia are more than twice those in the EU and China, and more than twenty times those in most of Africa.

This chart compares emission per capita for the four largest emitters (including the EU). It shows tons of CO2 (or equivalent for other global warming gases) per capita per year. It is based on projections of population from the US DOE World Energy Outlook in 2015 and total GHG emissions including land-use change and forestry compiled by the World Resources Institute.

The blue bars show emissions per capita for 2030, assuming each country honors its INDC pledge. The US has two lines at 10.4 or 11.0 depending on how we extrapolate from 2030 — about twice the EU’s proposed 5.4 tons/capita. China is at 10, 13 or 17 tons/capita, according to whether we assume its GDP grows at an average rate of 4%, 6%, or 8% per year to 2030. The latter two scenarios would result in greater than US emissions per capita. If we think emissions per capita are a fair way to compare  performance, there are huge disparities between countries. Each INDC is supposed to explain how its proposal is fair. US, Russia, and China don’t seem convincing in this respect.

The second question is whether these cuts are ambitious enough to keep global warming to 2oC (3.6oF).  The green bar in my graph shows the global average emissions of 4.6  tons/capita by 2030 (with a range of 3.5 to 5.5) as part of an emissions trajectory with a 60% chance of reaching that goal, derived from projections by the World Resources Institute. The EU target of 5.4 tons/capita is within range. But, the other major emitters will require substantial further reductions to reach this target. According to Climate Interactive, if all countries meet their INDC targets but no more, the World would be on a path to a long-term temperature increase by the end of the century of about 3.5oC, down 1 degree from 4.5oC without new reductions. So far the world seems to have shown only about one third of the ambition implied by the 2oC goal. Neverthelss, compared to previous attempts, these INDCs could provide a meaningful start if they form the basis of a global treaty in Paris — and solid precedent for future actions that are both more fair and ambitious. I’ll return to this in a future blog to explore a simpler way to think about “fairness”.

Many thanks to my Lumina colleague, Karen Lee, for assisting in this analysis using Analytica.

Max Henrion has 25 years of experience as a researcher, educator, software designer, consultant, and entrepreneur, specializing in the design and effective use of decision technologies. He is the Founder and CEO of Lumina Decision Systems. He has led teams to create decision-support tools in a wide variety of applications, including energy, environment, R&D management, healthcare, telecommunications, aerospace, security, and consumer choice. He is the lead designer of Lumina’s flagship product line, Analytica -— the software about which PC Week said “Everything that’s wrong with the common spreadsheet is fixed in Analytica”.
https://lumina.com/evidence-of-an-essay-definition.

1 thought on “Apples to Oranges to Chinese Gooseberries: Pledges for the Paris climate talks”