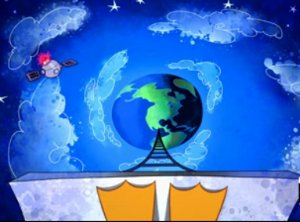 I remember a time when my driver’s license was just a learner’s permit, tater tots were the best part of lunch, my Great Gatsby book report was due on Friday, and physics was all about stick figures and arrows.  If I had to choose just one word to describe these

days I would call them frictionless. A single word can never do justice to every aspect of high school life but this one covers a surprisingly broad range: the tires on my VW Bug, the wooden desk seats, my face, and those delicious tots. The nice part about the frictionless era was living in a bubble of impractical hypothetical simplicities without having the decent sense to realize it.  Maybe Tina Wellington will notice me if I join the diving team. Maybe F. Scott Fitzgerald also wrote the National Anthem. Maybe I could drill a hole all the way through the Earth and jump in, falling frictionlessly until I emerged on the other side.

So what what was the whole tunneling through the Earth thing about?  I think it was supposed to be a lesson about gravity, in theory anyway.  (I vividly recall a practical gravity lesson as well, but the diving team story can wait.)  The basic question was: What is the force of gravity deep inside the Earth?  The key to answering this quiz correctly was to divide the Earth into two parts:  the hollow shell above you and the remaining sphere below you.  The hollow shell above contributes zero net gravitational force.  This means that if the Earth were hollow you could float weightlessly inside of it.  The sphere below you can be equivalently represented as having its entire mass concentrated at the center.  If the sphere has a uniform density and radius R its mass is proportional to R^3. The gravitational acceleration is G*mass/R^2.  Combine these equations and you will find that gravity is exactly proportional to R, the distance to the center of the Earth.  That was easy.  At this point the convenient result is usually parlayed into a math lesson about how the cosine function solves the equation. Now we can imagine jumping into this hole and oscillating back and forth through the center of the Earth in a perfect cosine pattern. Trigtastic!

But what would really happen if you were to drill a hole through the center of the Earth from pole to pole, reinforce it to withstand any pressure, suck it out to a perfect vacuum, coat the sides with hyper slippery quantum-lube, and jump in?  A geologist would point out that the Earth’s inner and outer cores are denser than the mantle and crust.  So much for the neatly proportional gravity vs. radius equation.  In fact, you would feel more gravity, not less, as you descend through the mantle getting closer to the core.  At the boundary between the mantle and outer core about 2700 km deep, you would weigh about 10% more than on the surface.  The acceleration would finally decrease as you descend into the core.  Now a dynamic simulation is required.  There’s no easy solution.

I started down this rabbit hole when I noticed Tunnel Through Earth among Analytica’s dynamic simulation example models.  Can you believe the original version assumed constant density?  Come on guys let’s get real! Thanks to some former high school students now studying geology at Cornell, a quick web search yielded “GS388 Houndout: Radial density distribution via the Adams-Williamson equation.” The author of this handout was nice enough to include a graph of gravity vs. depth.  I used these data along with Analytica’s interpolation function to update the Tunnel Through Earth model.  We are still ignoring a few important factors such as rotational road rash, concentration of subterranean uranium in the cranium, and the pathetic magnetic genetic effect.  But compared to most other frictionless falling through the Earth scenarios I think it’s pretty good!