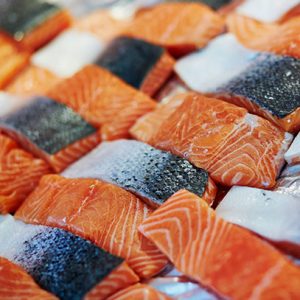 Is Farmed Salmon Safe to Eat?

The rapid growth of salmon farming has led to wider availability and lower prices of salmon, so that more people are now eating salmon instead of beef. One study advises restricting consumption of farmed salmon because of possible chemical contaminants in fish food. A more recent study published in Science (using Analytica) shows that the substantial known health benefits of salmon relative to beef overwhelm any possible slight increase in risks of farmed salmon compared to wild salmon.

This work was performed by Jouni Tuomisto and his colleagues at KTL — the National Public Health Institute of Finland (initials in Finnish). With about 850 employees, KTL does research, risk analysis, health monitoring, education, and training for public health. It also supports open source policy modeling by making the Analytica model on which it was based publicly available for download, review, and use.

A 2004 study on cancer-causing chemical contaminants in farmed salmon received widespread media coverage and raised major public concern. R. A. Hites and co-workers analyzed wild and farmed salmon samples from North and South America and Europe for organic pollutants (Science, 9 Jan. 2004, p. 226). They therefore recommended that farmed salmon should not be eaten more often than once every one to four months.

Since farmed salmon is an increasingly common part of the diet in Finland and elsewhere, Jouni Tuomisto and his research team at KTL realized that these recommendations might have a large impact on public health. The net effect requires assessment of both negative and positive effects. Farmed salmon has substantial health benefits that were ignored in the initial study by Hites et al. — including the benefits of omega-3 fatty acids. So, the KTL team decided to expand this analysis to benefits as well as risks.

“Analytica was used in this study because of its clear graphical interface. It enables inclusion of items that are connected to the assessment, but are not actually calculated. In this way, numerical result variables can be commented and evaluated within the model. The conclusions and their reasoning become more explicit.” Jouni Tuomisto, KITL.

Jouni Tuomisto and his team used Analytica to create a more comprehensive risk analysis: It addressed both the risks from pollutants in farmed salmon and the health benefits of salmon relative to beef and other animal proteins — notably those due to Omega-3 fatty acids. They expressed uncertainties about key parameters as probability distributions to enable explicit analysis of the sources and sizes of uncertainties. Results: The model estimated the excess cancer mortality due to pollutants in farmed salmon as 210 deaths per year in Western Europe (110 to 340 deaths with a 90% confidence interval [CI90]). It estimates that the restricted consumption of farmed salmon recommended by Hites et al. would prevent an estimated 40 deaths per year (2 to 110 as CI90). However, this recommendation would actually worsen the net health effect due to greater consumption of beef instead of salmon, increasing cancer and cardiac mortality by 5,200 deaths per year (34 to 19,000 as CI90). They concluded that, if the main concern is net health benefits, we should not restrict consumption of farmed salmon. KTL also analyzed the effect of reducing pollutant levels in fish feed. They estimate that this policy would save 360 lives per year , mainly because of a likely increase in consumption of salmon. The wide range (-3200 to +4100, CI90) results from scientific uncertainties, and especially uncertainty about how much this policy would affect levels of consumption. This level of uncertainty implies a high value for further research. They published their results in an article in Science, and offer the Analytica model available for free download for review. 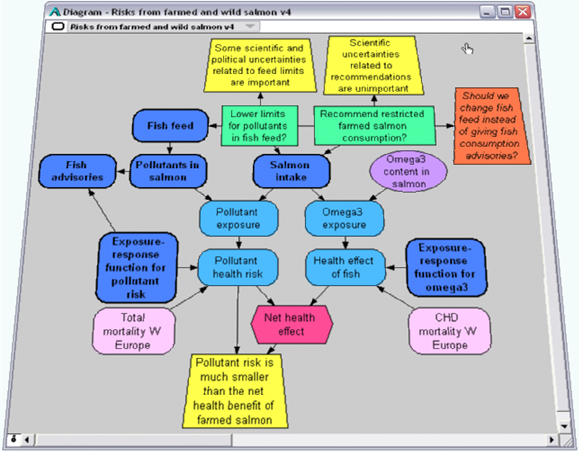