The more I learn about our Analytica users, the more I discover that “those who like it, like it a lot” (to borrow a slogan from a brewery back home in Canada). I would add “those who like it make some very cool things”. It turns out, one such thing: cognitive radio.

Our Customer Support Manager, Jaya Hoy, was recently chatting with a long-time user, Joe Mitola. He casually mentioned how useful he found Analytica. After pressing a bit further, Jaya discovered that ‘’Joe’ is in fact Dr. Joseph Mitola III, Fellow of the IEEE. (Note that the IEEE bestows this honor on, at most, 0.1% of their membership annually!) He was the first person to propose ‘cognitive radio’ as the future of smart radio. My non-electrical engineering understanding is as follows: It’s a software-controlled radio receiver/transmitter that decides what frequency to use based on what spectrum is available. It coordinates with other radios in real-time to minimize interference, and makes much more efficient use of scarce spectrum.. 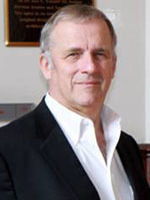 “In 1993, I was confronted with the problem of modeling the effects of various systems – hundreds of them controlled by people in ways that we could describe with a variety of probability distributions that virtually defied logic. Fortunately for me, a colleague at The MITRE Corporation was an Analytica® user.  It took me about 30 seconds to be impressed with the models that Roy had made in a very short period of time: minutes to hours vs. days to weeks with alternatives. As a FORTRAN, Assembly languages and LISP Machine LISP programmer from the 1980’s, I can program anything in any language – given time to learn the language. Analytica was just so obvious and intuitive that I was spun up and on my own in less than an hour.  My Analytica® model circa 1993 carried the day with a room full of two and three-star generals. Analytica’s Influence diagrams are intuitively appealing even to non-technical decision makers.

From that point forward, I used Analytica for representing numerous types of analytical trade spaces. In 1998, my Analytica model of wireless communications accurately predicted that the original iPhone (released in 2007) or any such phone using a combination of 2G GSM wireless plus WiFi would provide 30% more revenue at less than half the cost of the proposed 3G wireless standard. That model also showed how smart a wireless system could become as it began to factor in aspects of environments that people perceive naturally such as location and weather. It provided the quantitative basis for my Doctorate, in which I coined the term Cognitive Radio that has become the widely adopted baseline for smart radio systems today. During the past few years, I have continued to use Analytica® in cyber security and secure wireless systems. I can’t tell you how much my Analytica programming skills have helped me discover the bottom line in complex and highly technical decision processes and to communicate how small decisions can yield big outcomes. Thanks for creating a superb set of tools in your Analytica products.”

We’re going showcase more our users and the clever, interesting, and impactful work that they do in the coming months. Look forward to more case studies, more entries into our Supermodeller series (read about Cory Welch in the meantime), and some informal posts here on our blog about how students and teachers are using Analytica to explore some interesting problems!

Do you know anyone who’s using Analytica to do amazing things? Please let us know so we can help them show off their accomplishments!

Kimberley Mullins, PhD, is a Senior Consulting Analyst at Lumina. She holds a PhD jointly in Engineering & Public Policy and Civil & Environmental Engineering from Carnegie Mellon University. Her academic work focuses on risk analysis and assessing life-cycle environmental impacts of energy systems and agricultural systems. At Lumina, Kim is able to pursue two professional passions - helping people make better decisions through quantitative analysis, and improving energy systems. Outside of work hours, she's working up the cycling stamina to bike The Great Trail, which traverses Canada from the Pacific coast to the Atlantic.