Be a beta tester

We invite you to be a beta tester, and here is what we ask of you:

As a beta tester, you can ensure that your existing models work flawlessly in the new release, and if there is a problem you can let us know while there is still time for us to fix it. That way, you will be confident that you and your model users will have no trouble transitioning to the new release. You can start using or just previewing the newest features. If you do find and report bugs to us, the next build is just around the corner, so you get fast turn-around.

If you are already an Analytica user with active support, the beta installer obtains a 4.5 beta license for your same edition (Professional, Enterprise or Optimizer). If you are using 64-bit Windows and have active support, you may install the 64-bit edition even if your former license was for 32-bit, and you will be able to continue using 64-bit when the 4.5 is officially released.

You do not need to uninstall Analytica 4.4 when you install 4.5 beta. It is a good idea to keep them both installed, making it easy to go back if you need to, or to compare results in both.  When you double-click on a *.ana file to launch it, it will launch in the most recently installed version.

The list of new features is at What’s New in Analytica 4.5? A few of the highlights are: 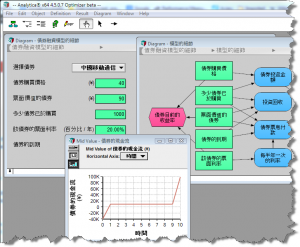 Models with Chinese content is enabled by new Unicode support in 4.5.

We place a high priority with every release to make sure that a new release is able to load and evaluate models from earlier releases. Analytica 4.5 is no exception. Models from Analytica 4.4 and earlier should work just fine when loaded into 4.5. If you find this not to be the case, we want to hear about it during the beta testing period.

While there are a couple of enhancements that have some possibility of impacting existing models (see Backward compatibility), we think there is a low risk of these impacting any given model that already runs in 4.4.

If you use unicode characters in your 4.5 models, these (and other extended characters) won’t be preserved if you then load the model into 4.4. If you don’t use non-ascii characters (i.e., if you stick to the characters formerly available in 4.4), you don’t need to worry about this. To learn more about this issue, see Model File Character Encoding.

The download links to the installers for the most recent beta build for Analytica and ADE are on the Beta Tester Page.  Download, run it, and follow the instructions.

volunteer experience medical essay.
We use cookies on our website to give you the most relevant experience by remembering your preferences and repeat visits. By clicking “Accept”, you consent to the use of ALL the cookies.
Do not sell my personal information.
https://lumina.com/essays-about-internet.
Cookie SettingsAccept
Manage consent