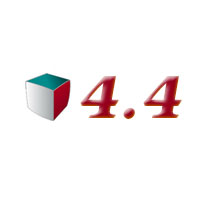 When you already have an earlier 4.4 installed, installing the patch takes about a

minute. If you have an internet connection and use Analytica 4.4, it will automatically detect the new patch within the next few days, download the installer, and then the next time you run Analytica, it will ask you if you want to install it.

To update ADE, or if you need to download the installer manually, just visit the Lumina.com downloads page.

The Analytica Wiki contains a comprehensive listing of all changes in this patch release at Build 4.4.3 release notes.  I’ll mention some of my favorite highlights here.

Proactively evaluate indexes: This preference controls whether Analytica evaluates indexes when a model is first loaded, as well as whether changing the index’s definition triggers its immediate evaluation.  By turning this off, you can often speed up model load time dramatically, especially if your model has computed indexes.

Prior to 4.4.3, it was necessary to evaluate all table indexes to parse the table, even when proactive evaluation was off.  Now Analytica is able to parse a table definition without evaluating the table indexes, thus reducing the amount of computation required to load a model into memory.

Large text in attributes & tables: Analytica 4.4 introduced an ability to enlarge attribute and table font size (see What’s new in Analytica 4.4?), but many things within the user interface didn’t adjust perfectly to the larger fonts.  Because of this, the new feature was relegated to the background and could only be turned on from typescript.  The 4.4.3 user interface now adapts well to the larger font size, and hence we have also exposed the feature as a preference setting.   No more squinting required. Also, when you demo your models, be sure to turn this on to make it easier for your audience to read everything.

Improved Robustness to file system errors.  File system glitches, which  include conditions such as disk full, bad sector, controller failure, network connection lost (for remote drive), or file locking by backup or file synchronization software, are generally rare, but when they do occur there is a real threat of information loss.  To reduce the chances that you might ever lose your model, or parts of it, we have improved the robustness of the File Save function to such errors.  When a file system error does occur, Analytica 4.4.3 ensures that the previously saved revision of your model is not altered,  that a meaningful error message indicates what happened, and that you have an opportunity to save your in-memory work elsewhere.

Improved stability: Numerous previous bugs that could result in an application crash were identified, isolated and fixed.

Display of Null values:  Cells in result tables that contain the «null» value are now displayed in a light gray font, thus removing visual distraction from the cells containing numbers and text.

Reverse Order: A new “Reverse order” option on the right-mouse context menu makes it easy to reverse the order of items in the key of a graph.

The risk of encountering a backward compatibility problem with a model that runs in 4.4.2 is very low.  During our QA testing, we ran dozens of models and ensured there were no differences with 4.4.2.    Nevertheless, there always remains the theoretical chance that an existing model uses buggy functionality, so that when the bug gets fixed, something changes.

When you load your model and turn off the Proactively evaluate indexes preference, as we recommend you do, this can cause differences in random number sequences in the case where your computed indexes make use of a random sample.  It is rare for an index to use random numbers, but we have seen it.  This doesn’t change how valid your results are, but it might change the exact random sequences in your Monte Carlo simulations.

Once again, I encourage all Analytica and ADE 4.4 users to install the 4.4.3 patch.

the case of essay.
what makes a great thesis statement.
We use cookies on our website to give you the most relevant experience by remembering your preferences and repeat visits. By clicking “Accept”, you consent to the use of ALL the cookies.
Do not sell my personal information.
Cookie SettingsAccept
Manage consent